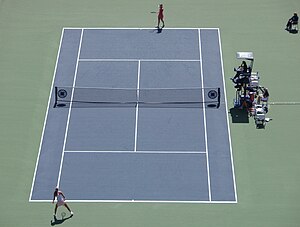 Some impressive tennis last night with Parnell dominating all.

The Parnell women won 6-0 with 2 of the matches going to 3 sets.

The Parnell men won a close contest. After a strong start winning both doubles, the Parnell men looked like they would be to strong. That was until the second set of an incredible tussle in the top singles. Statham playing some impressive tennis won the first set before Campbell Park come back to win in 3 phenomenal sets.

Using just 3 courts with an impressive crowd watching from the temporary stand it was 11pm when the final singles started to decide that yes, again Parnell take the spoils.

Another great night of tennis, just the start of an exciting summer of tennis action ahead. Today the West End money tournament comes alive and then the residentials form a great build up to the big action at Tennis Lane!